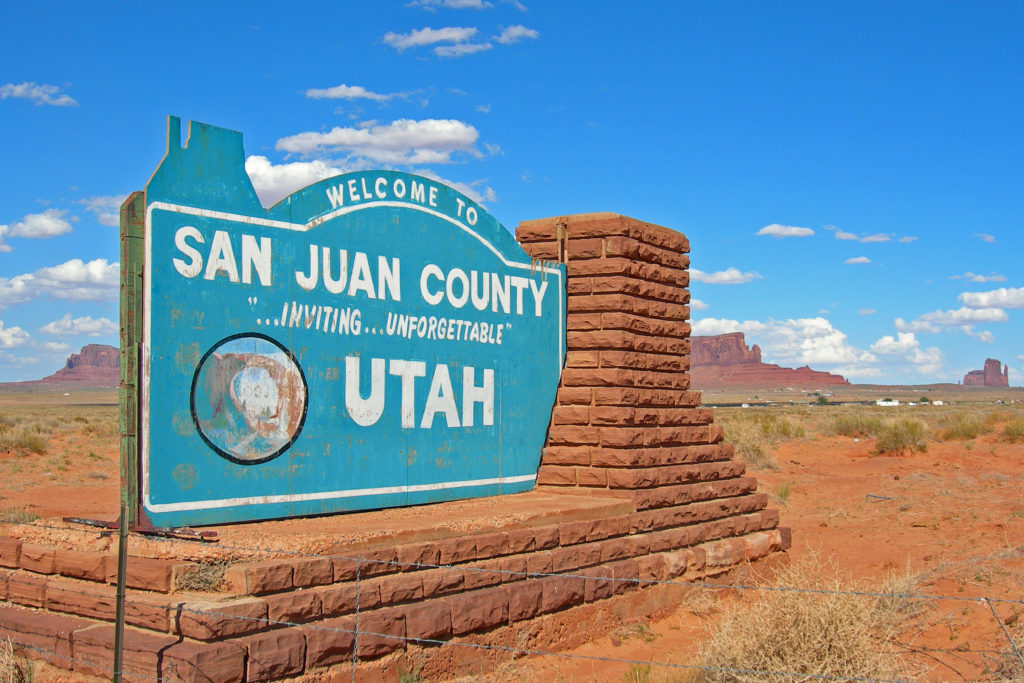 San Juan, Utah’s county clerk is facing an electioneering charge after he allegedly distributed, in polling places, copies of an editorial regarding a pending election. The Moab Sun News has more:

An investigation by the Weber County Sheriff’s Office into claims of electioneering by the San Juan County Clerk has been completed and referred to the Weber County Attorney’s office for review.

Weber County Attorney Christopher F. Allred told the Moab Sun News that his office has received the completed report and would be making recommendations for any ensuing criminal investigation within the next week.

The process comes after John David Nielsen, the San Juan County clerk, told the Salt Lake Tribune that he personally made many copies of a partisan newspaper editorial available to voters inside multiple polling stations during the county’s recent special election.

Attempting to influence voters within or near a polling place, known as electioneering, is a crime punishable by up to a year in jail and a $2,500 fine under Utah state law.

San Juan is turning to other counties for assistance with the investigation in an effort to avoid conflicts of interest:

The San Juan County Attorney and Sheriff’s Office referred the matter to Weber County for an outside investigation into the incident.

“The standard practice for dealing with a potential conflict of interest is to get someone else to step in,” said San Juan County Attorney Kendall Laws. “In this case, both the Sheriff and I thought that someone else would be better investigating the matter. We’re grateful that Weber County was able to do both.”

The electioneering charge stems from a complaint by poll watchers about distribution of an editorial regarding proposed changes to the county’s form of government and its impact on the voting rights of the local Navajo community:

Nielsen told reporters that he had decided to provide the editorials because he felt that voters were confused by Proposal 10, a controversial initiative to begin a change of government study committee in the county.

The editorials were spotted by election monitors with the American Civil Liberties Union of Utah. The group had stationed monitoring teams at every polling place in San Juan County for the first time this year after settling a voting rights lawsuit with the county in 2018.

When advised by the ACLU of Utah that the display of such information violated the law, the editorials were removed from polling places.

The reports that a county official entrusted to protect elections instead provided partisan information at an election place left John Mejia, legal director of the ACLU of Utah “incredulous.” The group told the Moab Sun News that it would be reviewing how the election was conducted.

The editorials were written by Blanding Mayor Joe Lyman, a supporter of Proposal 10. Lyman was one of a group of San Juan County residents to circulate a petition putting the possible change of government on the ballot.

Proposal 10 would have launched a one-year study of the county’s form of government, similar to the one by Grand County’s Change of Government Study Committee. Lyman and other supporters of the initiative said they believed expanding the number of commissioners would increase government accountability and representation.

That argument didn’t sway a majority of voters, many of whom viewed the proposal as an attempt to undermine a newly-minted Navajo and Democratic majority on the three-person commission. Davis Filfred, board chair for the regional indigenous advocacy group Utah Diné Bikéyah, released a statement calling the proposal an “attempt to remove Native Americans from office.”

It’s not the first time San Juan’s clerk has faced scrutiny for his actions on the job:

Nielsen could have faced legal charges in a separate case earlier in 2019, after a federal judge rebuked him for backdating documents outside of his legal authority to remove Willie Grayeyes, a candidate for the San Juan County Commission, from the ballot.

In that case, the case was referred to Grand County for investigation. Then-Grand County Attorney Andrew Fitzgerald ultimately declined to prosecute. Fitzgerald said that no criminal statute or election code directly applied to the incident. The attorney believed the issue to be more with a lack of professional knowledge than ill-intent on the part of the clerk.

Grayeyes won his election after being put back on the ballot.

Radio station KUER reports that the next step is to make a decision on whether to prosecute Nielsen – for which San Juan is once again seeking outside assistance:

San Juan County Attorney Kendall Laws… says he has asked other counties to pick up where Weber county left off — screening the investigation and deciding whether to file charges and prosecute the case. As of Tuesday morning, no counties have responded.

This story is a powerful reminder to election officials at every level about the need to keep communications with voters, especially on Election Day, not just straightforward and easy to understand but non-partisan. It’s clear that community tensions are high in San Juan County; here’s hoping that a final decision on prosecution and resolution of the issue can be reached sooner than later before we get too far into the 2020 election cycle. Stay tuned …