For the last two days, the EAC and the National Institute of Standards and Technology (NIST) convened the Technical Guidelines Development Committee (TGDC), which is charged with helping to develop voting system standards under the Help America Vote Act. The meeting was eagerly awaited by many in the field, given the opportunity to restart the standards process after re-appointment of a quorum of EAC Commissioners.

While much of the TGDC’s work is highly technical, there was one change announced yesterday that has the potential to significantly change the way the body does its work as well as the standards that result. Mary Brady, who manages NIST’s Voting Program, described a new public working group structure that will inform the TGDC’s work on voting system standards. These working groups will meet regularly via phone or in person, share a public email list and focus on one of each of the following areas: pre-election, election (i.e. during voting), post-election and interoperability/common data formats (i.e. the capability of different components to communicate using agreed-upon standards). These groups will involve election officials and experts plus anyone else willing to participate – and they will each seek input from “constituency groups” in four areas: usability and accessibility, cybersecurity, interoperability and testing/certification (presumably existing or potential labs). Here’s a graphic that the EAC shared via Twitter: 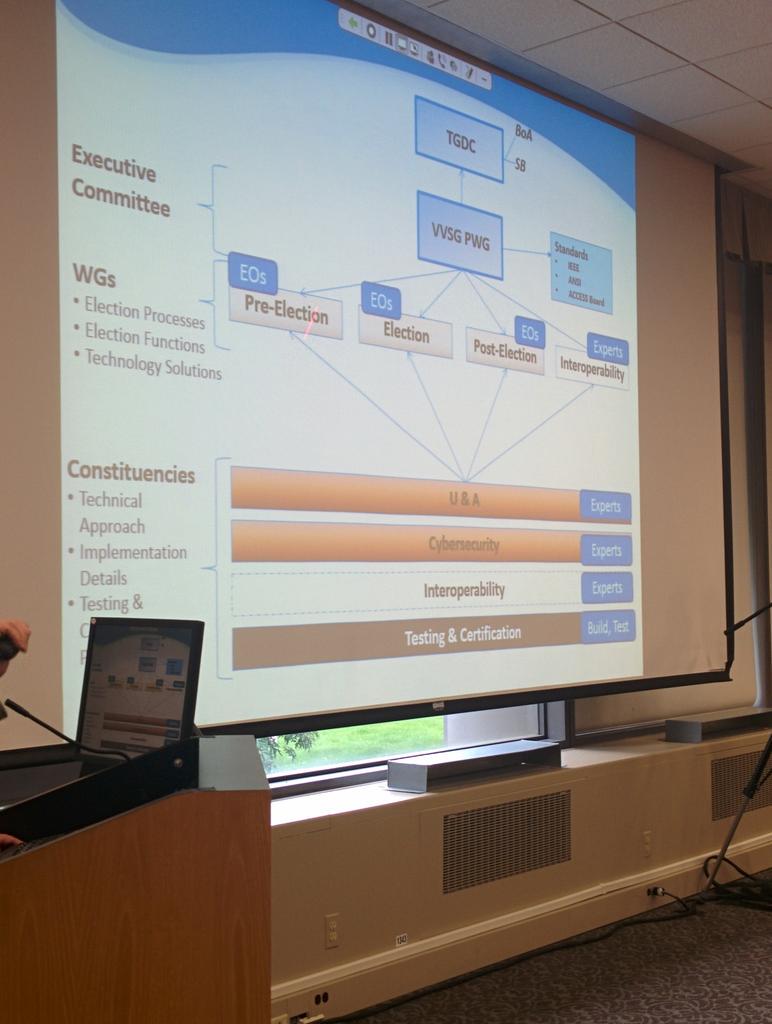 What this means, it appears, is that the TGDC’s role in the standards-setting process is about to become more participatory than ever before. The hope, it seems, is that a more open process will yield a more widely-accepted body of standards by moving beyond the traditional cycle of draft/comment/revision that characterizes many regulatory efforts at the federal level. It’s also consistent with the new EAC commissioners’ desire to make the agency’s work more visibly linked to the day-to-day activities of the election administration community.

Of course, the success of this effort will depend upon a) the willingness of members of the field to participate and b) their ability to craft and/or recommend consensus standards. It also moves the standards beyond sole reliance on the traditional cycle of draft/comment/revision that characterizes many regulatory efforts at the federal level. If successful, it could restart the standards process after a long hiatus that led some states and localities to consider (or commit to) moving out on their own on testing and certification. The EAC’s Brian Hancock reported at the meeting that testing times are improving; perhaps by accelerating the standards process, too, EAC/NIST could drastically reduce the “innovation lag” between R&D and the market in the field of voting technology.

The full agenda for the TGDC meeting is here – and more details about the working group process will be forthcoming from EAC and/or NIST.

It’s inside baseball but it’s a big deal … stay tuned!

In Reversal, Mystics’ DC Arena To Be Available as Voting “Supercenter”